Nick Hobson is the ACM’s Honorary Secretary. In his presentation he refers to developments since the founders of ACM and their dependence on a borrowed computer in the 1990’s to an efficient organisation using up-to-date electronic communications today. Nick Hobson has a distinguished flying career and a wealth of communication experience.

About Sophie & her address ›

About Sophie & her address › 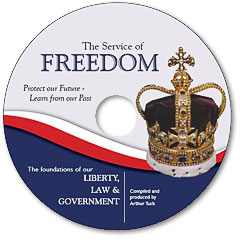 Voice of the Australian Flag

Voice of the Australian Constitution

The above audio files are in MP3 format and will play automatically after a few moments in most web browsers. Otherwise they can be saved to disk and then played in most media players - such as MS Windows Media Player, iTunes or the Quicktime player (all available for both MS Windows and Mac OSX).

The Service of Freedom

Video   23:56 duration 27.8MB Windows Media Player Video (V9)
Protect our future - learn from our past. The foundations of our liberty, law and government.