Winning Entries to the 2003 Essay Competition

"The Queen's Oath to Serve"

At around midday on June 2, 1953, in London's Westminster Abbey, a young woman was faced by the Archbishop of Canterbury, who asked her, "Madam, is your Majesty willing to take the Oath?"

The new Queen replied, "I am willing."

The archbishop then proceeded. "Will you solemnly promise and swear to govern the Peoples of the United Kingdom of Great Britain and Northern Ireland, Canada, Australia, New Zealand, the Union of South Africa, Pakistan and Ceylon, and of your Possessions and other Territories to any of them belonging or pertaining, according to their respective laws and customs?" to which the Queen replied, "I solemnly promise so to do."

Her Majesty Queen Elizabeth II then went on to promise to 'execute justice with mercy, and to maintain in the United Kingdom the Protestant Reformed Religion [the Anglican Church], and then swore at the altar to hold those promises sacred'. (King George's Jubilee Trust, 1953:20-23)

The Coronation Oath of the United Kingdom was introduced by the British Parliament in 1689, and has remained practically unchanged since that time. It is one of the two formal 'promises' to be made by a new Monarch before their Coronation, the other being the Coronation Declaration, as required by the 1689 Bill of Rights.

Both the Declaration and the Oath are formal promises made by the Monarch to 'serve' her people by governing each nation according to its own laws, ensuring that justice is done, and preserving true religion. Of course, the Queen herself does not personally govern the nations of the Commonwealth, nor does she oversee each nation's justice system. So, it may be asked, exactly what does Her Majesty do to 'serve' Her people as She promised?

Within Australia, as within many of the Commonwealth countries, this question can be answered by referring to the Federal Constitution. In practical terms, there are quite a number of things that Her Majesty does in response to Her promise.

The Queen is represented in Australia by the Governor-General, meaning that many of Her powers, functions and roles are performed by whoever holds that position.

In Section 1 of the Constitution, the Queen is specified as being the highest level of Government within Australia. The position of Governor-General is introduced and defined in Section 2 as being Her Majesty's representative within Australia. His/Her role is defined in various Sections, giving him the duties appoint the times for sessions of Parliament, along with having the power to prorogue or dissolve it. He/She is also given the authority to issue writs for general elections or for by-elections. The principal legislative authority of the Governor-General is to assent to or withhold assent from a law in the Queen's name, or to 'reserve the law for the Queen's pleasure', along with making recommendations for amendments to a proposed law. Alterations to the Constitution, following a successful referendum, are also to be presented to the Governor-General for the Queen's assent. Under Sections 61 to 64, 'The executive power of the Commonwealth is vested in the Queen and is exercisable by the Governor-General as the Queen's representative', with the latter to be advised by a Federal Executive Council made up of Ministers of State. Sections 64, 65, 67 and 72 deal with the appointment of Ministers of State, Civil Servants and Justices of the High Court by the Governor-General. Section 68 names the Governor-General as the Commander-in-Chief of the Australian Defence Force and Section 126 gives the Governor-General the power to appoint deputies if authorised by the Queen.

If the Constitution is to be read literally, it gives the impression that the Queen and Governor-General, as the Queen's representative, have relatively broad powers to be used at their discretion, such as in Section 68, mentioned above. Realistically, the very few powers that the Queen does exercise, for example, appointing the Governor-General, are done only on the advice of the Prime Minister of Australia. While the Governor-General performs many more functions, these are also on the advice of Ministers, in all but exceptional cases.

Nevertheless, despite the apparent powerlessness of the Regal and Vice-regal roles, it is the Queen's authority which makes her integral to the Australian system of government. It is in her name that parliament sits, that laws are made and upheld, and that justice is delivered. Her Majesty is the figurehead of the government and of the nation as a whole. It is this authority which is the most evident influence of the Queen and her representative and it can be seen and/or heard every day in the courtroom, in parliament, even on our currency.

The visibility of Her Majesty 'serving' her people in Australia has been shown in her onerous and fatiguing visits to Australia to meet the people in specially convened functions and her walks in public places to be seen by thousands of people who flock to have a chance to glimpse Her Majesty.

The non-political and relatively 'fixed' nature of this authority, brings to the Australian government the stability that it enjoys and has enjoyed over the past century since Federation.

Therefore, although the Queen herself does not exercise any real powers, it is through the authority vested in Her and exercised mostly by the Governor-General, her Australian Ministers and the judiciary that she plays Her part in the government of Australia, 'serving' Her people throughout her reign, just as She promised to do when she made Her Coronation Oath fifty years ago.

"At her coronation Queen Elizabeth swore to 'serve' her people. Constitutionally and in practical terms how does the Queen serve her Australian people?"

The Australian Constitution, like any constitution, clearly sets out a federal system of government and outlines a mechanism for the governance of the Australian people. Within this mechanism is a parliament and judicature headed by a monarch with absolute power, however, there is significant difference between the ways in which the Queen constitutionally and practically serves her Australian people. To quantify this difference between the way in which the constitution is set up and the way it is practically run, the apparent powers and conventions must be examined, thus allowing for an understanding of how the Queen serves her people to be obtained. In saying this, the following piece analyses both the apparent and conventional powers of the Queen to gain an insight into how the Australian people are served under the system of government which has now been in place for nearly one hundred and three years.

Within this constitution which has been in place for over one hundred years, the apparent powers pertaining to the full extent to which the Queen carries out her duties is set out in full and is quite impressive. Chapter One Part One of the Australian Constitution states that "The legislative power of the Commonwealth shall be vested in a Federal Parliament which shall consist of the Queen, a Senate and a House of Representatives…" From the outset, it is shown that constitutionally the Queen possesses absolute power and forms an intricate component of our system of government. Furthermore, the Queen possesses executive power which enables her to become involved herself in the legislative process. However, it is important to realise that these are the Queens apparent powers and if they were to be interpreted literally one would be quite wrong about the role that the Queen plays in Australia's government.

It is modern conventions which determine the role the Queen plays within our government; it is these conventions which give rise to a completely different set of processes by which Queen serves her people. An appropriate statement which is often used to reflect upon the influence of convention over the Queen's powers is, "the Queen 'reigns' but does not 'rule'." It is this notion induced by convention which gives rise to the fact that the Queen's role as Australia's head of state is purely symbolic. Therefore, the way in which the Queen services her people is in a purely symbolic capacity and is significantly different to the process as set out by the constitution. Quite simply, the Queen's apparent powers are restricted by conventions which are unwritten rules or practices that are generally understood and agreed to, about how the constitution should be interpreted, but have no real standing in law. It is this facet of our government which prevents the Queen from exercising absolute power and it is the symbolic role that the Queen plays in servicing her people which contributes to the successful governance of Australia.

In concluding, it is quite clear that the way in which the Queen serves her people is dramatically different to the way in which it is set out by the constitution. Constitutionally, the Queen exercises absolute power and serves her people through her role as head of state. However, convention dictates that the Queen only services her people in a purely symbolic role, and it is this role whereby real practical terms, there is no one individual with absolute power. Therefore, it is fair to say that constitutionally the Queen serves to provide the absolute rule of her people however practically she serves by symbolically leading a system of government that has been proven successful in servicing the peoples needs for thousands of years.

Bibliography
1. [Author Unknown]. 2001 "Australians for a Constitutional Monarchy." Available from: www.ourconstitution.org (Last accessed 12/09/2003) 2. Queensland Studies Authority. 1999 "A Short Course in the Australian Constitution" n.b This is the study booklet for the subject. 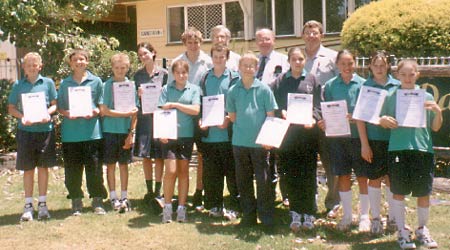